So I’ve been wanting to write about this amazing restaurant for a while because it’s one of my absolute favorite places to eat. The first time that I went to this place with Jessica, our waiter explained the inspiring Latin House story to us. Initially a food truck, Latin House gained its reputation by serving up some of the most unique cuisine in town. With the food truck craze in full swing across Miami, it didn’t take long before people began raving about their amazing dishes. Eventually they became so popular that groups of people began following the food truck from location to location and at times even to the chef’s home. Earning them the appropriate title of “stalkers”. Overwhelming success allowed the chef to open up a restaurant location and embrace the phrase “stalkers welcome”. For me it was love at first bite. Cuban, Mexican and American foods are all delicious on their own, but when combined together, they form some of the most epic fusion cuisine I’ve ever tasted in my life. So here’s what we ordered… 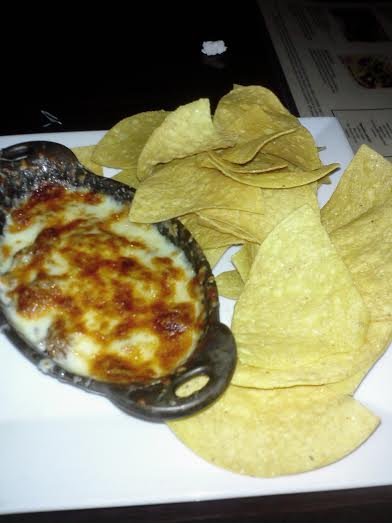 The Queso Fondue. A blend of 3 cheeses and Mexican chorizo, melted and served with fresh tortilla chips. This is a must have if you’re planning on ordering an appetizer. This mouthwatering treat is served in the same cast iron skillet that it’s cooked in, giving the Fondue a truly great flavor. 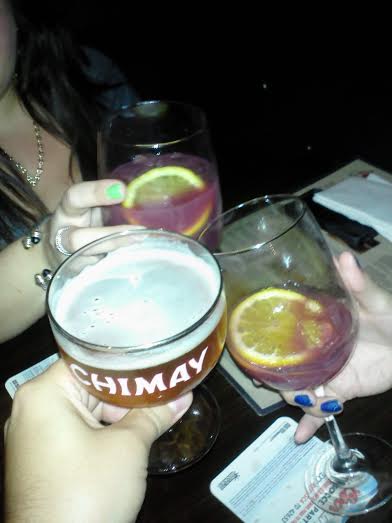 Latin House – 2 Sangria’s and a Chimay

Sangria and Chimay beer. Known for giving everything an unexpected twist, Latin House makes their own special version of Sangria that’s perfect for Miami weather. I went with one of my favorite beers called Chimay which never disappoints.

The Chimi Burrito and the Grilled Chimi Burrito. Normally Jessica goes with the “MadLove” burger but after trying my Chimi Burrito last time, I can’t blame her for ordering one this time around. Since they’re basically the same I’ll just tell you about the regular Chimi Burrito that I can’t seem to get enough of. Yellow “Chuchi” rice, three cheeses, sweet plantains and carne asada come wrapped in a large flour tortilla that is flash fried and topped with pico de gallo, avocado lime sauce and Mexican crema. In short, this is the holy grail of burritos. If you’re the type of person that likes going to a restaurant and ordering the dish that made them famous, then make sure you order one of these. I could literally write an essay explaining why this burrito is the greatest invention ever created but I rather you just try it for yourself.

I highly recommend that all food lovers give Latin House a shot. Great service and amazing food keep me going to this restaurant time after time. I hope you enjoyed the post and thanks for stopping by!